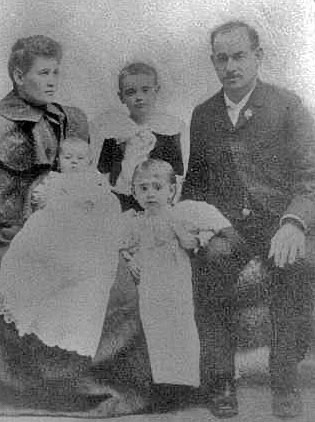 In August 1855, before the Home was built, the board accepted responsibility for nine-month-old Henry Kaufman and placed the infant in the care of a nurse. The baby’s mother, a native of Bavaria, had died in Touro Infirmary only a few months after her arrival in New Orleans. Baby Henry lived in the Home until February 1858, when the board discharged him to Henry and Matilda Ber, who adopted the boy and named him Henry Ber Kaufman. As an adult, Kaufman moved to Baton Rouge where he owned a grocery store, married, and raised a family.

In the above photo generously provided by family member Bobby Dobbins Title, Henry Ber Kaufman (at right) is shown with his wife, Carrie Gottlieb, and the first three of six children. Henry Ber Kaufman died in 1918. Additional information about Kaufman is available here.